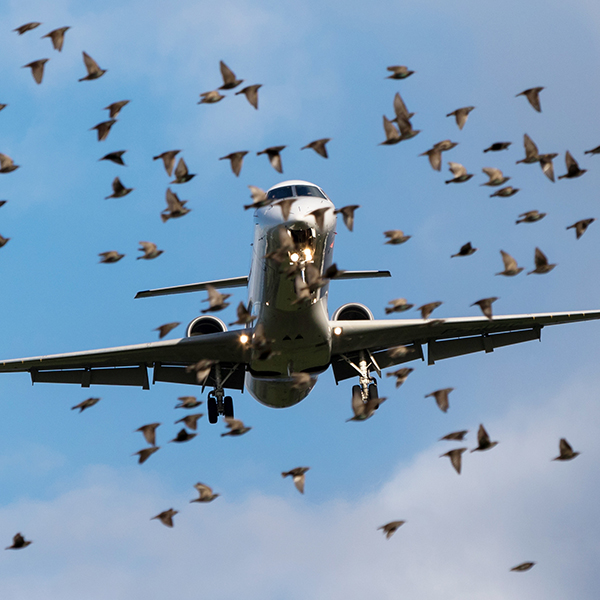 Every once in a while bird-related incidents around JFK and LaGuardia Airport make the nightly news. But we bet you never imagined the big part birds play in air traffic situations. Our feathered friends need to be considered on a daily basis to avoid bird strikes. Extensive planning and precautions taken by airport engineering teams are critical in keeping us safe – and is a science within itself.

What follows is a recent look at how birds factor into the thinking of the Port Authority of NY/NJ and what is done to minimize problems. Don’t worry though; we don’t deal with any bird related issues at SmartPark aside from when these creatures answer the call of nature while flying above our lots!

Air traffic controllers orchestrate the movements of airplanes in the air and on airport runways and taxiways to protect passengers and aircraft, while getting travelers to their destinations as efficiently as possible.

But they aren’t the only ones controlling air traffic, human or otherwise.

Flying beneath the radar is an altogether different kind of air traffic controller. This close-knit team, dedicated to reducing the chance of bird strikes, operates not from a control tower but the Port Authority Engineering Department, and comprises James Loudon, principal landscape architect, and three colleagues, Sara Yildirim, Jenifer Horst and Tom Nicklas, who mentored Loudon and works closely as his partner.

A family of geese enjoy an outing on a median strip on Washington St. near the Newport PATH station in Jersey City.

“We do whatever we can to discourage birds because birds cause the greatest threat to aircraft in flight during landings and takeoffs,” says Loudon, who was promoted earlier this year after many years with the landscape team.

“We work on everything together at every facility at the Port Authority,” says Loudon, “it’s that camaraderie that makes us successful.”

When Captain Chesley “Sully” Sullenberger landed Flight 1549 on the Hudson River after a flock of Canada Geese flew into the engines three minutes after take-off from LaGuardia Airport in January 2009, the incident dramatized the dangers of bird strikes at airports across the country. Sully’s heroic story was further highlighted by a Hollywood movie.

The landscape architecture team aren’t the subjects of blockbuster films and their aviation-related responsibilities are under-publicized. They don’t operate from the tower, but rather from a modest warren of cubicles on the 19th floor of 4 World Trade Center, or in the field across the region.

Nevertheless, they protect against bird strikes by working closely with aviation wildlife biologist, Laura Francoeur, to implement the Port Authority’s wildlife management plan, which includes managing the landscape to reduce the types of trees, shrubs and grasses that birds prefer.

Major airports — such as those operated by the Port Authority — are like Club Meds for birds, featuring large tracts of open land with areas of standing water that attract feathery fliers and create potential hazards to aviation.

Geese, for example, prefer to land on lawns, parking lots and other big open areas. By spacing trees in a grid 50 feet apart, geese can be discouraged from landing in densely wooded areas because they do not roost, Loudon says.

“Large trees are never planted so close together that they create a tree canopy overhead, which would encourage roosting and large populations of flocking birds,” he says.

Loudon and Francoeur follow an advisory by the Federal Aviation Administration (FAA) — which oversees air traffic controllers — that mandates what to plant and what not to plant. For example, trees and shrubs that produce edible seeds or fleshy berries are avoided.

The use of tall fescue seed mix inoculated with Endophyte typically is planted at Kennedy, Newark Liberty and LaGuardia airports to discourage foraging birds. Endophyte is a fungus that grows within the plant itself, which birds find unpalatable and motivates them to find another food source.

Tall fescue grass inoculated with Endophyte is used at the region’s airports to discourage foraging birds. Endophyte is a fungus that grows within the plant, which birds find unpalatable.

The landscape architects reduce or eliminate altogether the presence of standing fresh water at the airports through design and construction. Major construction to redevelop Terminal A at Newark Liberty created additional storm runoff and potentially more standing water. Working with civil engineers, the landscape architecture team redesigned a peripheral ditch around the site to capture more storm water, which is bordered by plants to dissuade geese from landing and entering the banks.

At low-lying Teterboro Airport, where heavy rains create high water levels in the ponds, the landscape design is a game of bait and switch. A sub-surface storage for water is constructed that the birds can’t see, which is then camouflaged with a foot of soil.

“By limiting the edible delights of birds and the places they gather to feed and reproduce, we can discourage them from visiting the airports, which goes a long way towards protecting the flying public from deadly bird strikes,” says Francoeur.